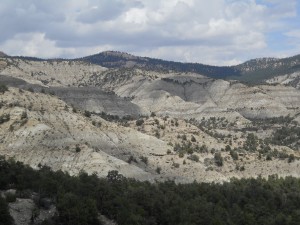 Exposures of the Kaiparowits Formation within Grand Staircase-Escalante National Monument.

Grand Staircase-Escalante National Monument (GSENM), southern Utah, USA. Some of the most rugged dinosaur-bearing rocks in the lower 48 states are exposed here, within nearly 3,000 square miles (7,600 square kilometers) of beautiful badlands, grasslands, and forest. Previously ignored by many paleontologists due to the harsh terrain, only the past 15 years have seen intense exploration of GSENM by field parties from several museums.

Since 1999, the Raymond M. Alf Museum of Paleontology has been exploring the 76 to 74 million year old exposures of the Kaiparowits Formation, in search of the ancient denizens from this corner of Utah. The Alf Museum has some unique volunteers on its expeditions—high school students from The Webb Schools in Claremont, California. Working alongside paleontologists Dr. Don Lofgren and Dr. Andy Farke, these students search for, collect, and research fossils in the Kaiparowits Formation. Many of these specimens have been featured in scientific publications, news articles, and museum exhibits.

The story of “Joe” the hadrosaur begins on a warm day in August 2009. Students Kevin Terris, Cameron Lutz, and Christian Quick were prospecting for fossils with Alf paleontologist Andy Farke. Prospecting is the task of looking for bone pieces on the surface, in hope that there is more in the hillside (contrary to popular belief, paleontologists do not just dig randomly). On their way up to previously unexplored rocks, the group quickly hiked through an area that had been searched already that year and previous years. 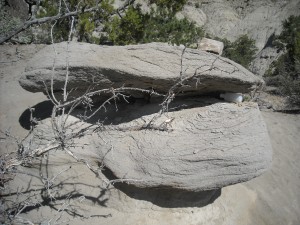 The discovery site of “Joe” the dinosaur.

Kevin Terris—who had just finished his senior year of high school—glanced under a “hoodoo” (mushroom-shaped rock formation), and saw a piece of bone poking out. He called over Dr. Farke, who eyeballed the find and dismissed it. In its exposed state, it looked like a piece of dinosaur rib—a common find of minimal scientific value that would take considerable effort to extract. Furthermore, the area had already been looked at by other volunteers earlier—why waste the time?

On a whim, Dr. Farke walked to the other side of the hoodoo, and turned over a small cobble. Staring up at him was a dinosaur skull. This was rather unexpected.

The group pulled out their brushes, and cleaned off the “rib” that Kevin had found earlier. It wasn’t a rib after all, but a string of toe bones. With the skull and toe bones so close together, there had to be a dinosaur skeleton in between!

Everyone was practically shaking with excitement as they realized what Kevin had found. The small size of the bones indicated a baby dinosaur—a rare find indeed! But, the group was due to leave the area in two days, and didn’t have the time or the tools to safely extract the fossil. Also, the group was permitted by the monument and the US Bureau of Land Management to collect fossils exposed on the surface (and they did remove the bones in immediate danger of erosion), but not for a full excavation.

The bones of “Joe” would have to wait another year. 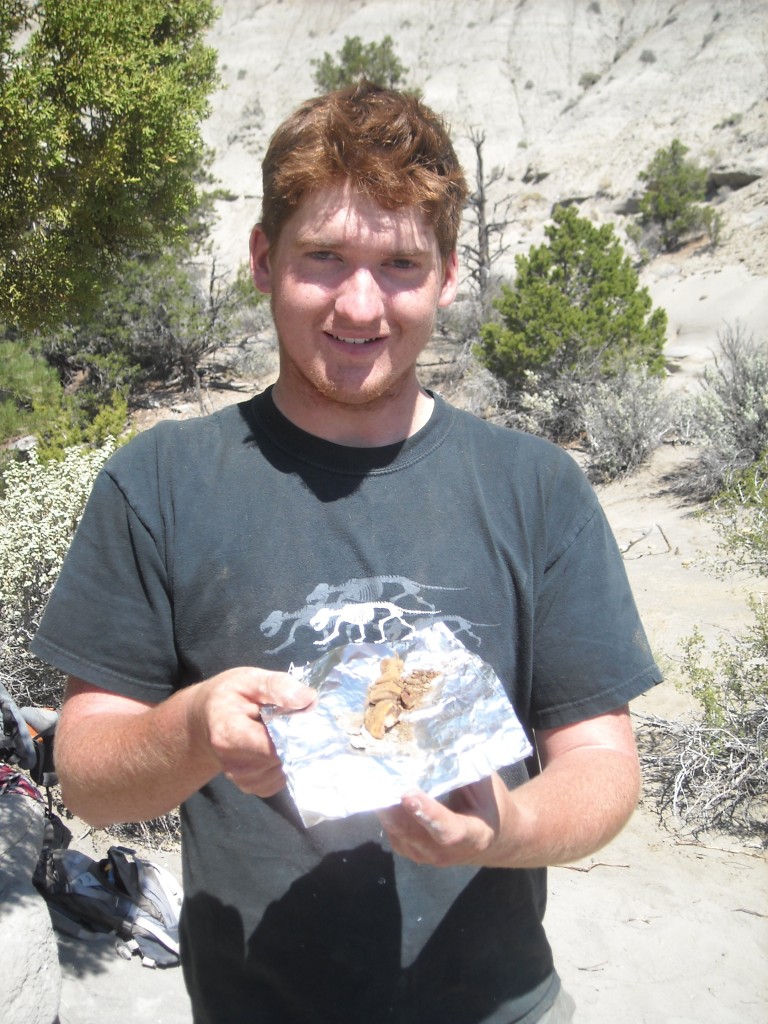 Kevin Terris, discoverer of “Joe”, with some of the toe bones from the skeleton.