Five researchers studied the bones of “Joe” and wrote a scientific paper to announce their findings. Two of the team members are professional paleontologists, and the remaining three are high school students recently graduated from The Webb Schools. Meet them below! 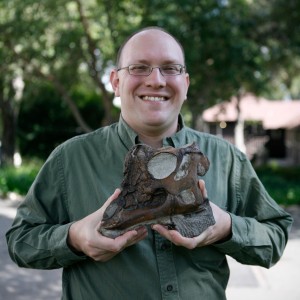 Dr. Andy Farke, Augustyn Family Curator at the Alf Museum, headed the research team. He grew up on a farm in rural South Dakota, and has had a passion for dinosaurs (especially the plant-eaters) since age 4. He completed college at South Dakota School of Mines and Technology and earned a Ph.D. at Stony Brook University. Andy joined the Alf Museum in 2008, and is the proud parent of a little human (under a year old, just like “Joe”!). 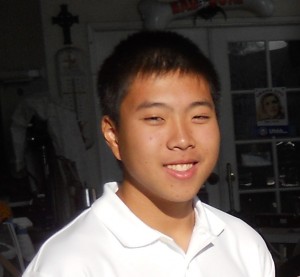 Derek Chok studied the nasal passages and skull anatomy of “Joe”, using CT scan data. He graduated from The Webb Schools in 2013; one of the highlights of his time there was keeping tally of the times he was right and Dr. Farke was wrong about interpretations of the bones of “Joe”. Derek is now a student at Columbia University. 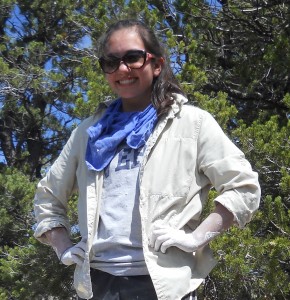 Annisa Herrero studied the jaws and soft tissue found with “Joe”. She graduated from The Webb Schools in 2013, after spending several years very active in the museum program (including involvement in the helicopter lift that recovered “Joe” as well as fieldwork in Madagascar). Annisa is now a student at Columbia University. 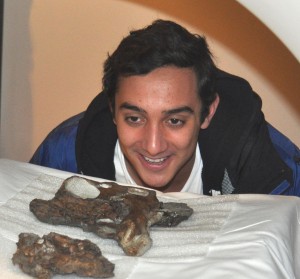 Brandon Scolieri focused on the postcranial skeleton of “Joe”, comparing its bones with those of adult hadrosaurs. He graduated from The Webb Schools in 2013; his first involvement with paleontology there was the spring before he started at the school, collecting fossil horse and camel bones in the Mojave Desert. Brandon will soon start his studies at UC Berkeley. 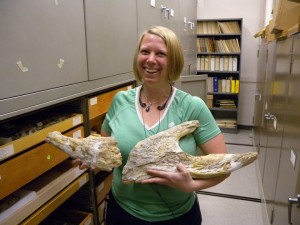 Dr. Sarah Werning is one of the world’s experts on bone biology in extinct and living animals, having studied microscopic bone anatomy in everything from marsupial mammals to dinosaurs. She applied her skills to figuring out the age of “Joe,” and understanding how its bone tissue compared with bone in other dinosaurs. A native of Chicago area, and thus a major fan of the Bears, Sarah recently completed her Ph.D. at UC Berkeley and is now an NSF Postdoctoral Research Fellow at Stony Brook University. To learn more about her work, visit Sarah’s home page.