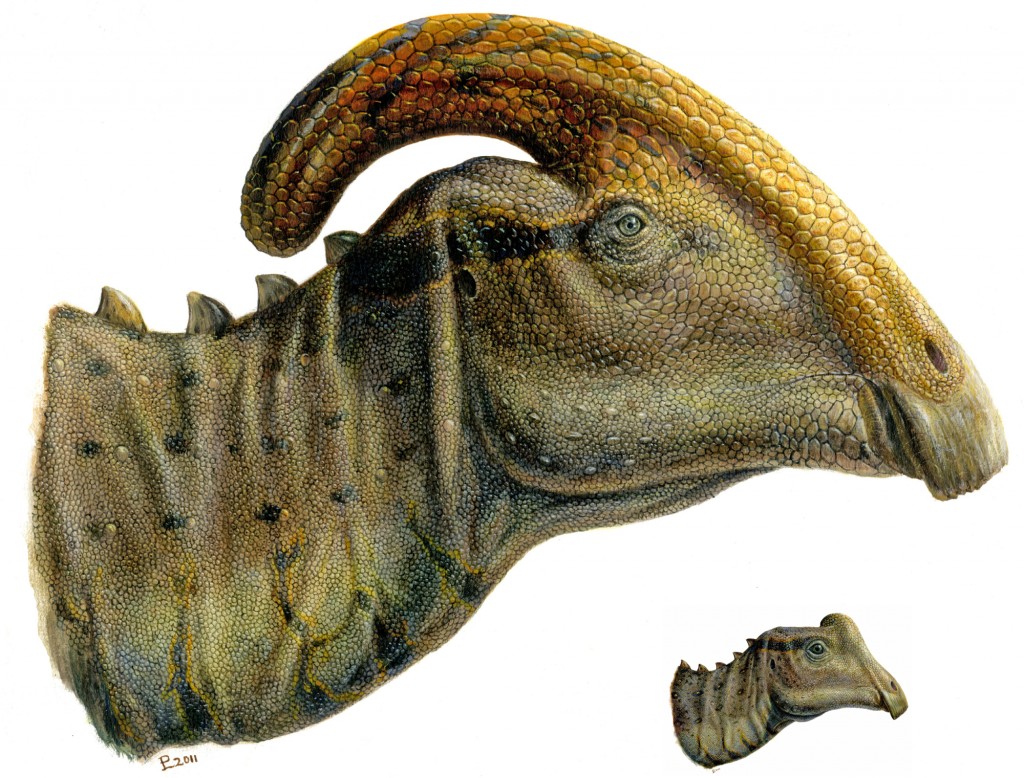 Adult and baby Parasaurolophus compared. Both heads are to scale; note that the baby lacks the big crest seen in the adult. Illustration by Lukas Panzarin.

“Joe” was a Parasaurolophus, a duck-billed (hadrosaurid) dinosaur that lived throughout western North America around 75 million years ago. A fully adult Parasaurolophus is notable for having a long and hollow bony tube on the top of its skull, which scientists speculate was used like a trumpet to blast sound for communication, as well as a billboard for visual display. Although partial skulls and skeletons of full-grown Parasaurolophus have been known for over 90 years, scientists previously knew little about how Parasaurolophus grew up.

Adult Parasaurolophus measured about 25 feet in total body length and weighed an estimated 2.5 tons. They were primarily quadrupeds, but may have walked on just their hind legs at times. Parasaurolophus were herbivores, using their sharp beaks to chop off plants, which were then ground up on their tightly packed teeth.

How do we know that “Joe” is a Parasaurolophus?
“Joe” looks very different from adult Parasaurolophus, especially because it lacks the prominent crest that adults have. However, many other features in the skull of “Joe” match up with adults, such as the shape of certain openings in the bone and the shape of the bony beak margin.

As an additional, circumstantial, piece of evidence, Parasaurolophus is the only type of crested dinosaur known from the 75 million year old rocks in Utah where “Joe” was found. Thus, it is simplest to assume that “Joe” is a Parasaurolophus.

How do you say the name?
The name “Parasaurolophus” is quite a mouthful! It is pronounced “PAIR-uh-SORE-AH-luf-us”. Still having trouble? Hear the pronunciation using the media player below: